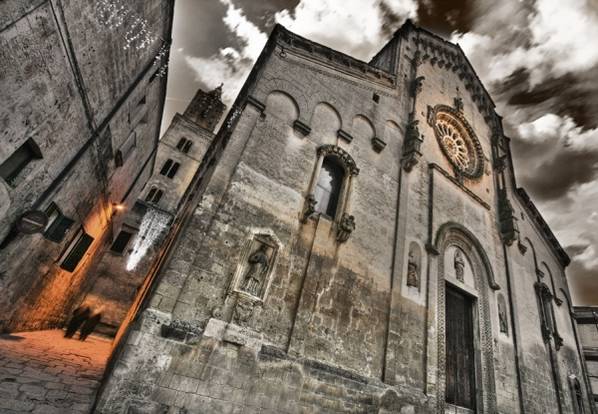 Leaving the Cathedral you will find a very nice view in front of you: below us the valley where the Sasso Barisano lies, and, opposite, as the crow flies, there is Piazza Vittorio Veneto with its panoramic point framed by three arches. Above you can see the towers of the Tramontano Castle, raised on the hill “De Montigny” in a mirror position with respect to the Cathedral to contrast the spiritual domain exercised by the Church with the secular one exercised by the count.

The castle was never completed because the count Giancarlo Tramontano who had commissioned its construction, (in 1497 he had bought the county of Matera from King Ferrante I), was killed by the Matera population that arose due to the harassment imposed by him on December 28, 1514 , right in the street behind us, behind the Duomo, since then called “via Riscatto”.