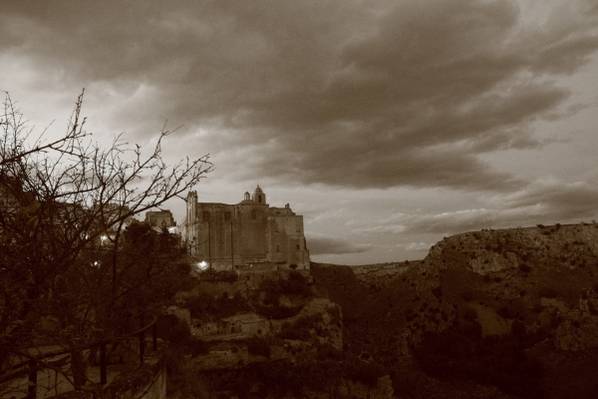 The monastic complex of Sant’Agostino dominates the Sasso Barisano from a rocky outcrop surrounded by deep chasms. The monks of the order of the Eremitani founded the convent in 1592 by annexing the church dedicated to Santa Maria delle Grazie. The Augustinians raised the building on an ancient hypogeum dedicated to San Guglielmo dating back to the 11th century. In 1734 a terrible earthquake ruined the entire complex which was restored and became the seat of the General Chapter of the Order of the Augustinians.

In 1750 the church was consecrated by Mons. Antonio Antinori. The suppression of the convent, the result of subversive laws, saw its premises intended for hospitalization for troops; subsequently they became the seat of the prison and then the reception for the elderly. Today it is the headquarters of the Superintendence for Architectural and Environmental Heritage. The original nucleus of the Augustinian settlement is located below the current structure, in a series of underground rooms suitable for conventual life, the last traces of which are represented by a crypt with an entrance inside today’s church, to the left of the high altar. This is the underground church dedicated to San Guglielmo da Vercelli (1085-1142), who came to carry out his apostolate in the southern lands. On the right wall there are remains of ancient frescoes and more recent decorations dating back to the seventeenth century: a “Madonna with Child”, a “Delivery of the Rule of St. Augustine” and a “Trinity” with crowned father and son and the dove of the Holy Spirit on a golden sphere.

The facade is a fine example of late Baroque architecture. It is articulated on two levels and enclosed in paired pilasters, crowned by a mixtilinear tympanum. In the lower part, the portal is surmounted by a niche with the statue of Sant’Agostino: the Saint, is represented according to traditional iconography, with long beard and skinny face, miter decorated on the head and a large cloak, while holding the church with left hand.
Above the cornice, there is a niche with the statue of a blessing Saint Bishop and, on both sides, the statues of San Paolo and San Pietro related to the Persio family statuary. Between the church and the convent, the limestone bell tower rises, consisting of a parallelepiped with a single-lancet window on each face.

The church has a Latin cross and develops in a single nave with side altars, divided by pillars with half-columns, pilasters and capitals with acanthus leaves. Some of the altars are in limestone by local artists, others in polychrome marble and white stucco, made by Neapolitan craftsmen between 1748 and 1749. The first on the left is a carved and painted stone altar in late Baroque style. It is surmounted by a canvas framed by cherubs, volutes and leaves, which depicts a crucifixion with the Magdalene, Saint John the Baptist and the Madonna at the foot of the cross; below an Augustinian nun and S. Rita appear.

The second altar, on the left, is dedicated to the Madonna delle Grazie, extremely refined in the polychromy and in the marble inlays that reproduce leaves and fruits. On the altar there is a fresco dating back to 1595, depicting the Madonna delle Grazie with the blessing Child. The third altar is dominated by a canvas depicting San Nicola da Tolentino with the book and the lily, San Vito, accompanied by the dogs, the Madonna and Child, Sant’Apollonia and Santa Caterina with the souls of Purgatory. The coping presents a central medallion depicting a cross, a crown, a lily and a palm tree. The rest is decorated with tempera on the wall. A polychrome wooden statue depicts Santa Apollonia with a golden tunic and red cloak, the work of Neapolitan workers. Between the second and third altars there is an 18th century wooden pulpit. composed of a confessional and a canopy, with a central medallion.

In the transept, surmounted by a hemispherical dome, to the left of the main altar, there is the statue depicting San Vito, made at the end of the seventeenth century. The statue on the right represents Saint Augustine in the act of chasing away the heresy that lies under the feet in the likeness of a woman, dating back to the XVIII century.

At the end of the presbytery, there is the wooden choir composed of 14 stalls, divided by pilasters topped with shells and volutes. In front of the choir there is the main altar in inlaid polychrome marble, on which there is a wooden crucifix of the sixteenth century. Behind the altar, on a higher level, protected by a carved wooden balustrade, there is a pipe organ from 1770, gilded and painted, built by the Liguori brothers of Montemurro, with the choir of the same period.

The altars on the right are in carved and painted stone and are affected by the late Baroque taste also in the subjects of the paintings. On the first altar there is a canvas depicting San Francesco da Paola, San Pasquale di Baylon, San Leonardo and, above, San Giuseppe and Sant’Anna. Two angels hold the painting of the Madonna delle Grazie. The painting of the second altar depicts the Holy Trinity with Sant’Agata on the left, Saint Lucia suspended in the clouds, kneeling Sant’Ilario and San Biagio. The third altar is surmounted by the canvas of the Madonna delle Grazie with below Sant’Agostino, Santa Monica and a Holy Bishop. To the right of the entrance is a precious stone baptismal font from San Pietro Barisano. On the counter-façade there is the coat of arms of the Augustinians: the heart of Jesus pierced by an arrow with a book and a belt at the bottom.