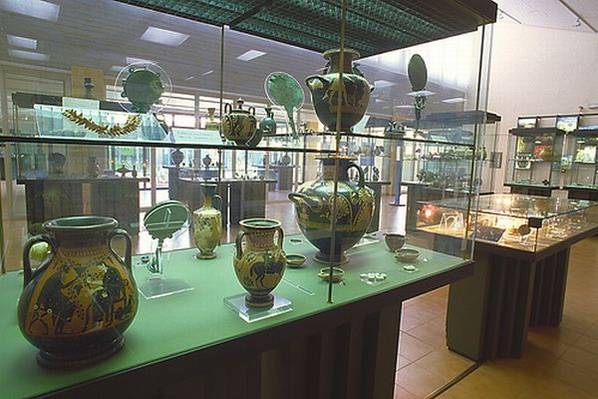 The Ridola Museum is housed in the complex wanted by the archbishop of Matera Antonio del Ryos Culminarez between 1668 and 1702 and called “new houses”, which was to include, in addition to the other structures and the church of Santa Chiara, a hospital for treatment of the sick, which in 1696 was used as the seat of the Royal Audience, as the funds earmarked for the sustenance of the church were not sufficient to cover its management costs. In 1707, at the request of the Capuchins of the order of Saint Clare, a convent dedicated to this saint was established in the building and thus began the expansion of the former hospital, while at the same time the church was enriched with precious liturgical objects and the gilding of the stuccos that decorate the interior.

Despite the suppression of religious orders, the convent was used by the nuns until the early twentieth century as a place of spiritual retreat. It is currently the seat of the museum established in 1911 and named after the great physician and archaeologist senator Domenico Ridola who donated his precious collections of finds to the state and houses most of the material from the Paleolithic, Neolithic era (Ridola himself discovered the remains of entire “entrenched” villages dating back to this period) and the Iron and Bronze Age, as well as the rich grave goods and materials of the sanctuaries and ancient inhabited centers located on the heights around Matera and evidence of the ancient civilization of Magna Graecia. The museum consists of seven exhibition rooms, for a total of approx. 2400.