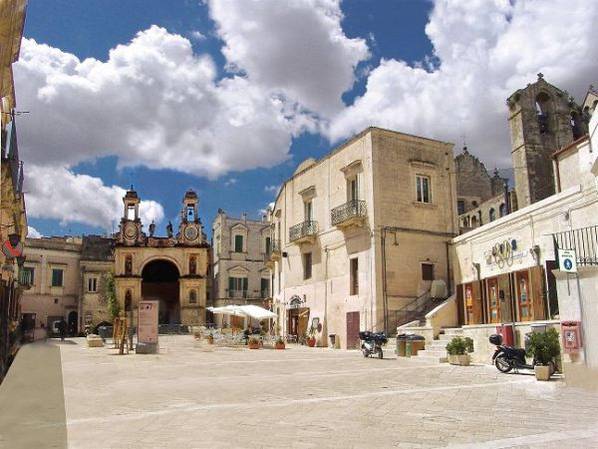 Already “Piazza Maggiore” used in the fourteenth century as a market square and surrounded by warehouses, taverns and shops, in 1550 Piazza del Sedile was arranged to house the governor’s offices, city prisons, and the municipal building or “seat”. The Palazzo del Sedile, built in 1540 by Archbishop Saraceno as the seat of the municipal meetings of the “city university”, was renovated and modified as it appears today in 1779, and has an unusual shape: a large entrance arch, surrounded by niches with terracotta statues representing the allegory of the four cardinal virtues suitable for good governance: justice, strength, prudence and temperance.

The two towering rococo-style towers contain a beautiful sundial on the left and a clock on the right. Above, we find the inevitable statues of the patrons of Matera, S. Eustachio and Maria Santissima della Bruna who symbolically watch over the city. This building was used until 1944 as the seat of the municipal administration, today it is the seat of the National Conservatory named after the maternal composer “Egidio Romualdo Duni”. Currently in the basement of this building, a very modern auditorium has been created, which hosts prestigious musical events and concerts of a high cultural level.