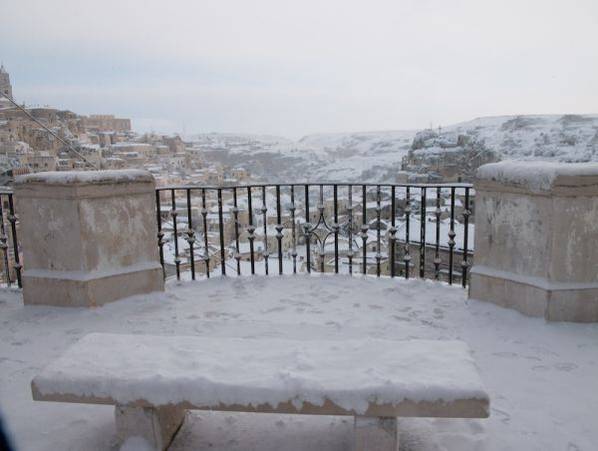 From the balcony of Piazzetta Pascoli you can enjoy a wonderful overview of the Civita, the ancient fortress of the city dominated by the bell tower of the Cathedral and Sasso Caveoso. A “crib city” that surely provokes particular emotions in those who for the first time are faced with an original urban show. To understand the “Matera” phenomenon, let’s stick to the geographical element: in fact, each city has its origins in the contribution of particular factors that make the survival of an organized community possible. The primary requirements include defensibility, the presence of water, woods, an abundance of game and arable land.

The territory where Matera rises responded to the life needs of a pastoral community and hunters.
The settlements of socially organized communities date back to the Neolithic era. Three villages, which like the vertices of a hypothetical triangle, gravitated around a perennial water tank called locally “jurio” (eddy), a modest pond in the Gravina di Matera that faces the square where we are and is an important water tank.

Being deeply embedded among the high rocky overhangs that do not allow the sun to beat on its surface, the evaporation process was drastically reduced in such a way that even in the summer, when the feeder stream went dry, the pond retained plenty of water. These settlements remained alive, probably until the man from the hunter and breeder became a farmer and, lacking arable land on the Murgia, abandoning two of these villages, settled on the Civita hill. The hill of the Civita, due to the contribution of various factors certainly determined by the particular natural conditions of defensibility and by the central position between the Murgia suitable for sheep farming and hunting, and the arable land degrading towards the Bradano river, was slowly developing, acquiring the size of inhabited center, albeit disjointed, of an agro-pastoral nature.

This remained during the Greek period and in the following Roman one, although it is conceivable that over the centuries interconnected relationships were being created between the various settlements, giving the Colle della Civita the identity of a single village in which a poor life materialized in housing structures dug into the tufaceous rock that created an atypical way of dwelling in the cliff, which was perpetuated in the following centuries using the graded slopes of the hill originating residences distributed on several levels connected together by a network of ramps and walkways. In the early Middle Ages Matera was a nerve center on the border between the Byzantine East and the West, was therefore fortified mainly by the Lombards and erected in “Castaldato”, thus assuming the connotation of a city in all respects, with walls defensive walls and, in the highest part of the hill, a castle. The defensive structure is perceivable along with the look a line running from the Cathedral and follow the rocky line, now interspersed with buildings built on the foundations of the old castle and the walls. This enclosure closed, like a ring, the fortress on which the Cathedral currently dominates.

In the same period, modest rural centers called “farmhouses” developed in the two valleys, which together with the rock churches assumed the urbanistic residential aspect of the future Sassi: the Caveoso opposite and the Barisano behind the Cathedral.

Historic Matera Between the year one thousand and the fourteenth century it presented itself planimetrically, like a bird with spread wings: its body and head formed by the Civita and the two wings by the two Sassi: the Caveoso and the Barisano.
Before continuing in the description of the city, some information on the name of Matera. A controversial name and scholars, to date, have not found an etymological explanation on which to agree: those who opine that it derives from the Greek “Meteoron”, those who at the Greek-jonic term Matera, ie mother, others from the fusion of the first letters of the two destroyed cities of Magna Grecia located on the shores of the Ionian Sea a few kilometers from Matera: Metaponto and Heraclea. The name remains shrouded in mystery. Starting from the fifteenth century, the city, climbing over the defensive walls, expanded into the two valleys giving rise to the two districts of Sasso Barisano and Sasso Caveoso. Opposite we have the emerging Monterrone rocky boulder with its two cave churches identified by a large iron cross.

At peak, under the balcony overlooking, there are those who appeared probably in 1936 as the “circles” of Dante’s hell to Carlo Levi, which hit him deeply, with the characteristic aspect of the road layout that runs on the vault of the houses below . An image that in his book “Christ stopped in Eboli”, without knowing it and wanting it, brought this original urban complex to fame. In the 1950s, the Sassi districts were evacuated from the resident population thanks to a special law that promoted the construction of new housing districts on the hills surrounding the city, due to the appalling sanitary conditions, mainly caused by human overcrowding that developed during the 19th century. After an abandonment of over twenty years, a process of revitalization began, a great work started with an international recovery competition, which allowed the reintegration of the Sassi into the city and which due to its historical urban value, became part of the UNESCO world heritage in 1993.