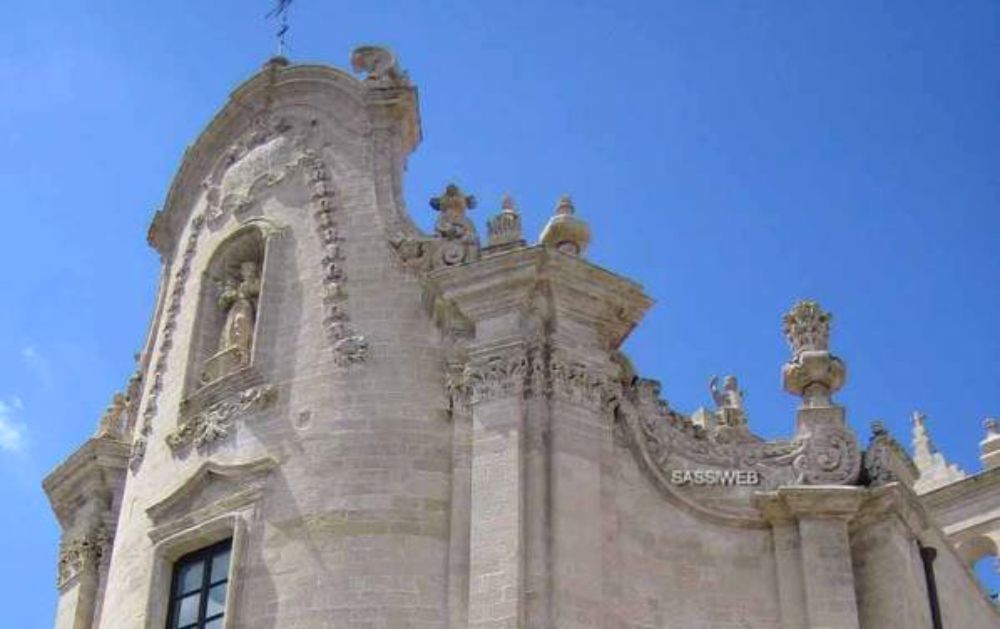 Although finished in 1747 the Church of the new Purgatory presents us with a late Baroque facade, built by Andrea Fatone from Andria. Erected with the funds of the “Confraternity of the Holy Souls of Purgatory”, together with those offered by the simple citizens of Matera, who also lent their work for free, it presents a single recurring theme, that of Death, very popular at the time, considered not like the end, but like the beginning of a higher life.

The façade has an original curved line that makes it resemble a “pastoral miter”, a typical episcopal headdress, is divided into two parts by a string course frame and marked by four pilasters on which acroters and phytomorphic scrolls rest. In the upper part, in the niche, Madonna and Child, and carved decorations representing angels, wreaths of flowers and fruit and singular flames that envelop penitent souls, while the lower part, full of details, shows us in the niches, on the right the Archangel Michael and left the Archangel Raphael. The most unusual and interesting part is the large portal carved with volutes, and on the architrave, two skeletons flank a damned soul, while the wooden door obsessively repeats the theme of death by showing us in 36 squares tibias and skulls sometimes adorned with rulers and prelates, precisely to emphasize the equality of all men after death.

The interior differs from the other churches in the city in that it has a central plan, and is surmounted by a high dome resting on four pillars with matching columns, divided into eight sectors within which the evangelists Mark, Luke are represented, Matthew, John and the Fathers of the Church Ambrogio Girolamo Agostino and Gregorio Magno, whose liturgical lines the Church was to follow. The eight canvases painted by Francesco Oliva in 1765 that adorn the interior represent scenes from the Passion of Jesus. There are three altars on the main altar, which contains the relics of Saints Giovanni da Matera, Prospero and Callisto, an eighteenth-century canvas by Vito Antonio Conversi “San Gaetano who intercedes with the Virgin for the souls of Purgatory”. In the apse there are the inevitable patron saints of the city, Maria Santissima della Bruna and Sant’Eustachio. On the side altars there are other canvases by Conversi: “The death of San Giuseppe, San Nicola da Tolentino, the Virgin and the souls of Purgatory. The Castelli organ, dated 1755, and the wooden pulpit in use until the 1970s are noteworthy.