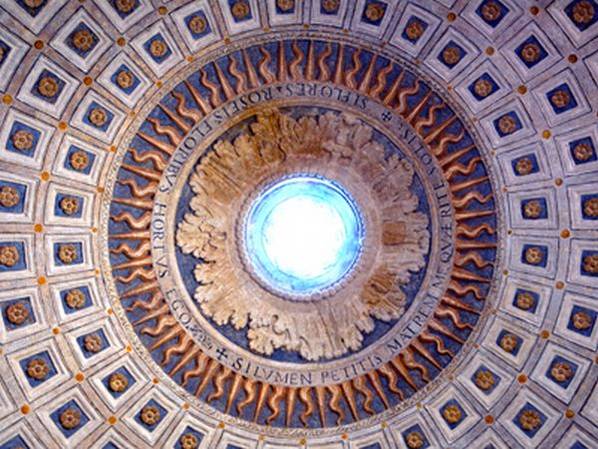 Founded in 1230 by Blessed Nicola da Giovinazzo, a disciple of S. Domenico himself, the complex included the church of San Domenico and the convent of the Preachers, located just outside the walls in the area of the “Foggiali” (from “fovea” large holes used the conservation of cereals and foodstuffs of which the area was rich) and experienced periods of mixed fortunes, until 1809, the year of the suppression of religious orders, in which it was destined to be the headquarters of the barracks, then the post office, while from 1927 today it houses the Prefecture. Giovanni Pascoli lived there for two years during his teaching at the gymnasium of Matera.

The facade of the Church is in Apulian Romanesque style and has come down to us without the top originally with two slopes, as a seventeenth-century reconstruction replaced the original trussed roof with a barrel vault in tuff tuff. At the top it is embellished with blind arches with pilasters while on the architraved portal rests a figure of telamon holding up an elaborate rose window representing the wheel of life, a very popular theme in the Middle Ages. On the top of the rose window stands the archangel Michael who defeats the dragon, while on the sides are carved two deacons dressed in the fourteenth-century manner like the telamon below. In the center of the rose window the dog with the torch in his mouth represents the Dominican order: the dog guarding the Lord and the torch to represent the faith, while inside along the circumference scenes of the life of the shepherds.

The interior, with a Latin cross layout with three naves and a transept, was heavily modified in 1744, the year in which the walls were decorated with stucco and the “Cappellone del Rosario” was added and presents precious evidence of seventeenth and eighteenth-century local artistic production. As soon as you enter, on the right, the tomb of Orazio Persio (1589-1649), an illustrious jurisconsult and Matera writer, depicted in the portrait above.

Immediately afterwards, the Persio chapel, a very culturally and artistically active Matera family, has a recently discovered seventeenth-century fresco on the side, while the painted limestone altar is dominated by a copy of Raphael’s “The Holy Family”, performed by Domizio Persio. On the next altar “Pietà” of 1614 by the painter Giovanni Donato Oppido, inserted in a carved and gilded altar altarpiece with typically Baroque figures of angels. Continuing, in a niche, Madonna del Rosario, a statue richly dressed according to the eighteenth-century costume.

At this point we find the entrance to the so-called “Cappellone del Rosario”, built between 1577 and 1588, an octagonal chapel with a hemispherical coffered dome, dedicated to the Madonna of the Rosary, which as an inscription on a pillar reminds us, in 1630 it saved the city from a plague epidemic. The skylight surrounded by a flight of angels sculpted at the top and the round entrance arch decorated with six bas-reliefs attributed to Giulio Persio, representing S. Domenico, S. Giacinto, S. Pietro Martire da Verona is an unknown bishop, a sacred scene and, to be noted, a procession of hooded people, as the religious brotherhoods which at times provided for the anonymity of the members were in the past very widespread.
On the eighteenth-century altar “Madonna del Rosario” by Vito Antonio Conversi, also author of the small oval paintings of the Mysteries, around, along the walls. In the niches, tuff statues of Santa Lucia and Sant’Agata of the seventeenth century which respectively show the symbols of their martyrdom. The small majolica stoup from 1754, characteristic of Laterza’s production, encased in the wall just ahead of the “cappellone” exit, is delightful.

A little further on, in a niche, a nineteenth-century wooden and fabric statue of San Domenico, holding a model of the church in which it is possible to see how it could look, before the modifications, in full, flanked by the dog with the torch in his mouth, symbol of the Dominicans. The left aisle houses on the first altar a canvas by Vito Antonio Conversi, the “Annunciation” 1753, while on the second altar canvas by Antonio Farnelli (1751) “Madonna and child between San Vincenzo and San Giacomo”. To see, in the niche further on, the Madonna with Child, a statue in polychrome stone by Stefano da Putignano, (1518) particularly revered by the people of Matera as “lady of health”, probably for its florid and serene appearance. Above seventeenth-century canvas by Vito Antonio Conversi “San Domenico”. In the third altar, canvas Jesus blessing the child, 18th century, by an unknown author. The last altar of the nave houses the sixteenth-century statue of San Pietro Martire, sculpted by Stefano da Putignano. On the central altar, a papier-mâché sculptural group “Madonna of the Rosary” and, above, canvas “Miracle of Soriano” (1630) by Giovanni Donato Oppido.