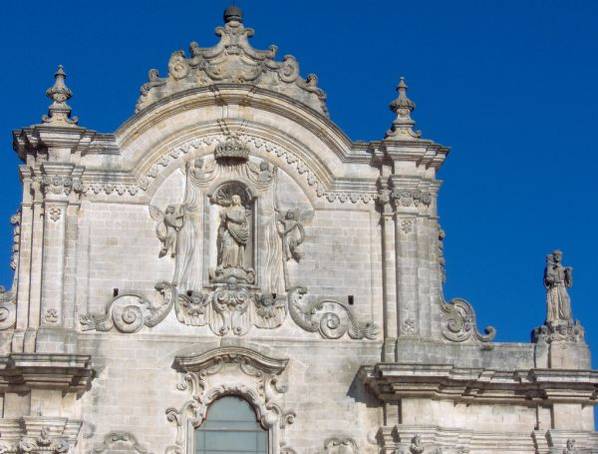 The Church of San Francesco d’Assisi, placed in a prominent position at the end of Via del Corso and at the beginning of Via Ridola, on the edge of the large, clear and luminous square of the same name, presents us with a large and regular Baroque facade, dating back to 18th century, although originally from the thirteenth century, as it was modified several times until it reached its present appearance. The façade, designed by the architects Vito Valentino and Tommaso Pennetta, is harmoniously arranged on two floors divided laterally by string course cornices, and crossed by pilasters ending in acroteri that slender and join the two parts.

In the lower part, the five windows and the portal are surrounded by delicate plant volutes, while in the upper part, in the center, in the niche, statue of the Immaculate Madonna, with angels holding the rich Baroque drapery, while on the edge of the string course, on the right San Francesco, on the left Sant’Antonio da Padova. We can identify four salient moments in the architectural development of the Church of San Francesco d’Assisi: the first phase of construction was around 1200, when, above the pre-existing convent of Saints Peter and Paul, during the phase of greatest expansion of the Franciscan movement in Basilicata, the first church dedicated to San Francesco was erected, of which we find memory in few details surviving the various transformations that we can identify, for example, in a room to the right of the choir where the original cross vault profiled by ribs is visible, or in the original entrance door, located to the east and walled up and hidden by a staircase, or in the remains of the sarcophagus of the Count of Timmari Tovarelli, located to the north.

Another crucial moment of the genesis of the church occurred in the fifteenth century, when the adjoining convent was enlarged and added, and the lateral chapels inside were added; from this moment we can see the 15th century frescoes, partly useless, which came to light with the removal of the wooden choir behind the altar, which depict images of the “Miracles of San Giacomo Maggiore”, the “announcement”, a “Madonna on the throne “and the” Four martyrs of Albano “. In 1670 the place underwent a first Baroque transformation on the initiative of Archbishop Lanfranchi, while a century later the interior was reorganized by Carlo Casino and Domenico Preziosi, who entirely covered the church with precious stucco friezes. By popular tradition, punctually reported in the chronicles of Verricelli, the church was founded by Saint Francis himself with the license of Pope Onofrio III.

The interior currently has a single nave, with side chapels, some of which are very interesting to visit in particular: the second chapel on the right, for example, contains an elaborate altar with a wooden riser, commissioned by the same Monsignor lanfranchi richly decorated and sculpted , which contains the wooden statue of Sant’Antonio, by the sculptor Stefano da Putignano. Note, in the same chapel, the sixteenth-century sarcophagus of Eustachio Paulicelli, known in Matera as “the advocate of the poor”. In the second chapel on the left instead, the canvas by Antonio Stabile (1580) “Immaculate Conception” in which the Virgin is crushing the snake, surrounded by a frame of clouds and by the various symbols and cartouches related to the Marian cult is to be seen.

In the third chapel on the left there is a trap door that leads to the crypt Dei Ss. Pietro e Paolo, which contains some of the oldest frescoes of the maternal heritage. and consists of two rooms, both with lenticular cavities representing a symbolic dome on the ceiling: In the first, with a parabolic arch niche, fresco representing San Vincenzo; in the second, in the apse cavity obtained at the end, Madonna and Child flanked by the archangels Gabriele and Raffaele. The adjoining fresco, on the other hand, has an artistic as well as a documentary value: it seems that it represents Pope Urban II’s visit to Matera in 1093, which we see seated on the throne with a rich Dalmatian dress and flanked by Abbot Stefano who holds the rule in his hand of his order. The buildings against the blue background of the fresco probably portray the Church of Sant’Eustachio, built around the year 1000 and consecrated in 1082 in the place where the Cathedral Church is currently located.

The most important element contained in this church is certainly the dismantled Polyptych (XV century) and placed on the balustrade of the Cantoria, contained in a beautiful seventeenth-century frame, at first attributed to Bartolomeo Vivarini and later definitively identified as a work by Lazzaro Bastiani , divided into nine squares: in the center Madonna enthroned with the Child and on the left San Pietro, San Francesco, Santa Caterina and Santa Elisabetta, on the right San Paolo, Sant’Antonio, San Bernardino and San Ludovico da Tolosa. Note the finesse of the features, the delicate features and the richness of details of the precious garments, which make it a work of unique value. The last gem that this church reserves for us is, near the entrance portal, the ancient holy water stoup (13th century), skillfully carved in stone probably by the same stonemasons operating in the Cathedral, San Giovanni and San Domenico churches, all three contemporary.