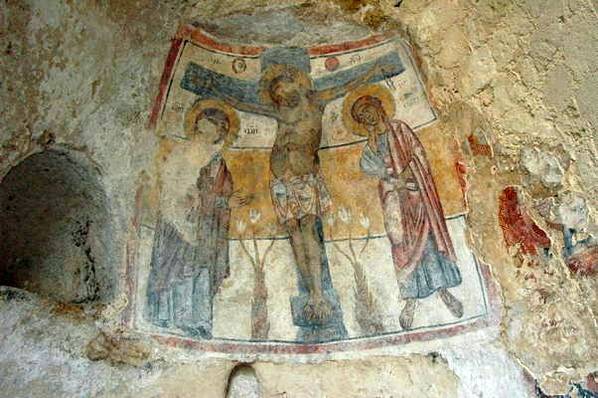 The Church of Madonna delle Virtù is part of a vast monastic complex dating back to the year 1000 and has a peculiarity: despite being a full-blown basilica, with all the well-defined architectural spaces, it is entirely excavated in calcarenite. It has a basilica plan with three naves marked by large pillars that support donkey-back vaults in which even a matroneum with two orders of superimposed arches and twisted columns is carved in high relief. The apses of the naves are semicircular, while the vault in correspondence forms a real dome with a Greek cross inscribed in relief.

Currently one enters a lateral nave as the original plan of the church was distorted by the construction of the road to rejoin the Sassi in 1934, for the construction of which was which the left nave was halved and the passage that led to the overlying crypt was eliminated of St. Nicholas of the Greeks. The frescoes of this church are in a poor state of conservation, however we can recognize in the central apse an eighteenth-century crucifixion (Crucifixion with the Virgin and Saint John), probably originally of good quality judging by the drapery of the robes and the balanced composition, while in the At the beginning of the right aisle there is another late-Gothic 14th-15th century Crucifixion.

In the middle of the right nave there is the entrance of a rough quadrangular chamber which was used as a tuff quarry where the ancient excavation technique in calcarenite is well known. In the church they found asylum the penitent nuns of S. Maria di Accon brought to Matera in 1198 by the archbishop Andrea, apparently to rekindle the faith of the citizens; in the second half of the 13th century the nuns moved to the monastery of Santa Maria ai foggiali, today’s San Giovanni Battista, but retained the monastic complex as a refuge for pilgrims. In 1674 the place was opened for worship to the population and the interior was modified: two of the original six pillars were removed and the current entrance was opened. Currently this church, together with the above complex of San Nicola dei Greci is home to a prestigious exhibition space which during the summer hosts important contemporary art exhibitions.