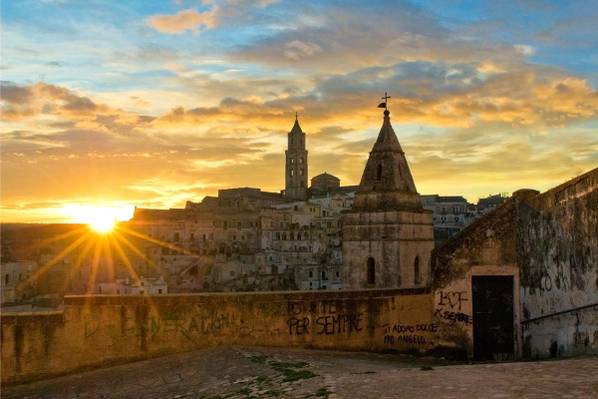 The Church of San Pietro Barisano is a perfect example of the typical architectural structure of the Sassi: it has a facade built in tuff, but the interior is almost completely excavated. The church dates back to the year one thousand and was known as San Pietro in Veteribus, but the facade it presents us today dates back to 1755, as an inscription on it shows us, the year in which the church was renovated and partially modified. The facade consists of three architraved portals, of which the larger central one, two oval windows and an unusual four-lobed rose window, which give the whole a good compositional balance. The bell tower is detached from the body of the church and rests on a natural rock base to stand on two levels divided by a terrace, with the balustrade softened by a rusticated frieze, and is thinning until it ends in a narrow cusp.

The church has been recently restored as with the displacement of the Sassi of the 50s it has undergone a long period of abandonment and decay, and unfortunately it has been subject to theft and vandalism. The interior is made up of three naves divided by imposing excavated pillars that support round arches, and consists of six altars also excavated in the tuff. The main altar is from the eighteenth century and is made of gilded wood. In the right nave there is a small opening near the first altar, dedicated to the Holy Family: it is a room dating back to the 15th century modifications that was walled in 700 to use it as an ossuary that came to light during the last restorations: after removing the many bones preserved there, the ancient frescoes paradoxically protected by this process came to light: on the jamb the Face of the Virgin, and from the right: Santa Caterina, San Canione, a Saint unknown, Sant’Agostino, Sant’Eustachio and San Rocco.

Continuing along the nave, on the second polychrome high-relief altar “Madonna with Child” and laterally, in the niches, figures of saints. Of the left nave, the second altar is worth noting, that of the Annunciation, with the sculptural group among which the statues of the Madonna and the Archangel Gabriel stand out. The third altar has 17th and 18th century sculptures and frescoes on the sides and is called the Ss. Crucifix because it belongs to the homonymous brotherhood of Rome in which a miraculously survived crucifix was venerated after the fire of 1519 of the Roman church of San Marcello whose display gave indulgence, granted in 1777 by Pope Pius VI, as we read in the inscriptions at the entrance to the sacristy. In the same place, the inscription “SANCTA SANCTORUM” reminds us of the entrance through the sacristy into the crypt, in which there are, in addition to two frescoes of Saints that have recently come to light and another ossuary, the characteristic niches of the burial tombs. , so called because the deceased was left sitting and the organic liquids related to the decomposition flowed out being absorbed by the porous limestone.