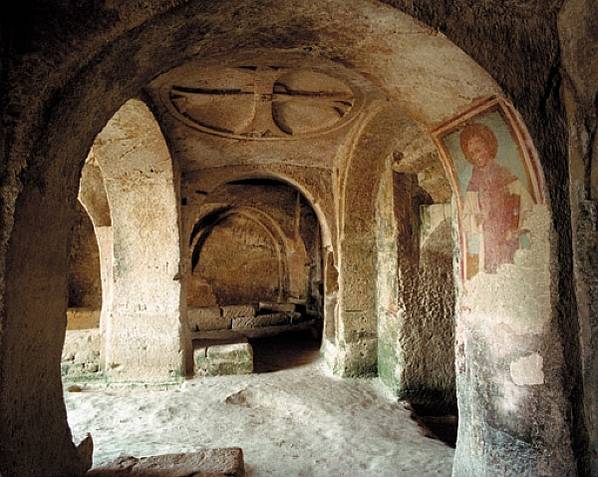 At the end of the slight ascent, an elegant portal, surmounted by a pointed arch, allows access to a rectangular courtyard overlooked by four cave churches: the so-called CONVICINIO DI SANT’ANTONIO.
The first church, immediately after the entrance arch, is known by the popular name of TEMPE CADUTE, a name given to the entire district subject to continuous rock falls, the ‘tempe’, but was known in the past as San Primo.

The crypt is divided into two divergent chapels divided by a pillar which divides at the arches. The vault is ribbed with central ribs, the apse lunettes have an equilateral cross in relief. Through a passage, on the left, you enter the adjacent church of Sant’Eligio, also called the Annunziata.

The crypt is dedicated to SANT’ELIGIO considered the protector of pets. A saint particularly revered in the past by a society such as maternal, peasant and pastoral. Just think that on December 1st, on the occasion of the feast of the Saint, the farmers, shepherds and herdsmen, brought from the early hours of the morning, to the current square, where the church and the column surmounted by the statue of the Saint stands, in the district del Piano, the mules, horses and oxen, to implore their protection, making them go around the column.

The crypt, although uneven and modified, after being transformed into a cellar following the abandonment and construction of the chapel in the district of the 18th century Piano, is still legible in the plan: a large room for the faithful followed by the presbytery reserved for the priest, outlined on the bottom by three arches that delimit, in depth, different apses, that is, the terminal part of the church plant in which the altar was located.

In the left room, in a large apse lunette decorated with a series of squares, stands a fourteenth-century CHRIST PANTOCRATOR in the classic iconography blessing with the right hand and the Gospel open in the left hand.
The apse caps are decorated with a cross. Numerous traces of fresco offer the wealth that once decorated the walls of the crypt.

The CRYPT OF SAN DONATO internally has a quadrangular plan with only two central pillars that break down the plane of the just sketched apses. The curtain vaults highlight the liturgical spaces: in succession from the entrance: the vestibule, that is, an entrance space, then the classroom for the faithful and finally the presbytery for the priest. The vault of the left presbytery differs in the cross element and the central one in a large dome with a raised lily cross inscribed on it.

The frescoes are well made: on the arch that connects the right pillar to the external wall, the face of SAN DONATO is visible with the machine gun that covers the nimbato head of the Holy Bishop. On the right pillar, leaning against the apse, the image of San Leonardo in a monastic habit, blessing the Latin and regent, with the left the book and the tools of martyrdom, a characteristic iconographic element of this saint. Below, genuflected, the small figure of the client.

On the intrados of the apse arch, on the right, in the upper part, there is a very ruined fresco of Santa Dorotea, a young girl from Caesarea di Cappadocia who suffered martyrdom around 311 after Christ, becoming, over the centuries, protector of the gardeners.

On the back wall of the apse there are two seventeenth-century scenes: on the left a Bishop on horseback who pierces a dragon, a recurring representation in the Christian liturgical iconography, just look at the representations of Saint George and the Archangel Michael, on the right the miracle of a Saint Bishop in the presence of monks and devotees.

The last room (front entrance) is the crypt of S. Antonio, has three apsed naves, with the central nave with a humpback vault with a rib; in the apse area the cross vaults have carved lily crosses. In the three naves it is possible to see the millstones for the production of wine, as in recent times the church was abandoned and reused as a cellar; all the rooms that open on the right of the aisles were in fact created during the same period for this purpose, you can still see the rounded cut of the steps due to the wear resulting from the custom of rolling the barrels for the stairs to place them in the rooms deeper and fresher.

The frescoes present on the right, on the first pillar, S. Antonio Abate (XV century), on the next pillar San Sebastiano (XV century), while in the apse area of the left nave there is a devotional scene dating back to the XVIII century, probably relative to the cult of the Madonna di Picciano.