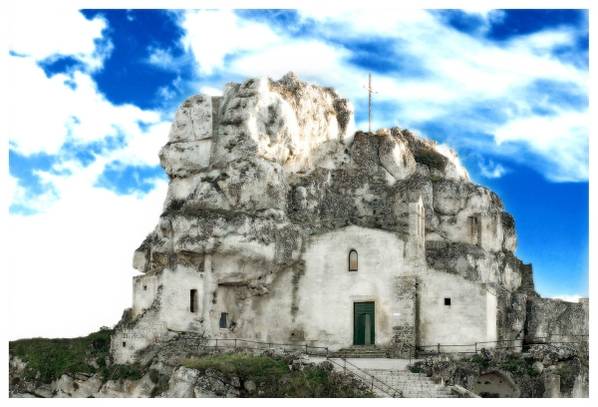 The Rock Church Madonna dell’Idris is half excavated in the rocky boulder and half built after the barrel vault collapsed before the 16th century. A small sailing bell tower protrudes from the structure giving the complex a harmonious appearance. The church remained liturgically in operation, albeit occasionally, on special holidays, until the 1940s. The interior is extremely simple, devoid of noteworthy architectural elements. At one time the frescoes, which were to cover almost entirely the walls, were the wealth of the crypt. Part of them were destroyed by neglect, others detached from the Superintendency for Historical and Artistic Heritage in the early 1970s due to the poor conservation conditions and the high humidity present.

On the altar the XVII century Madonna and Child painted in tempera, that is diluting the colors in sticky water or in milk or egg white, has two containers on the sides used to contain the water called “idrie”, from here it probably takes the name “Idris” the church. On the right, Saint Eustace, patron of the city, particularly revered by his mother, portrayed at the time of his legendary conversion when, going hunting, he sees a deer with a golden cross between the horns; the same representation enriches a beautiful stained glass window of the Cathedral and is present, in the form of a fresco, in some cave churches located in the Sassi and in the countryside. To the right of this fresco, the representation of a Nativity scene and Saint Anthony, all frescoes dating back to the 17th century.

Continuing to the right, after the corner of the wall, a crude and common-style crucifixion, but interesting because it has as its background the ancient silhouette of the city of Matera. Below the mouth of an ancient cistern. To the left of the altar there is a Madonna Annunziata and, on the adjacent wall on the left, San Michele Arcangelo tramples on the devil, a very ruined but interesting fresco when the devil is not represented as usual in the form of a snake but has human features.