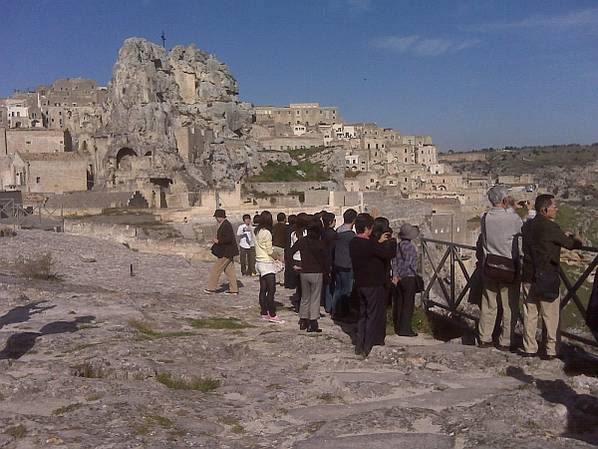 The Rione Malve is variously articulated, located on two different rocky floors with buildings that face the front from the road of via Bruno Buozzi on one side and with the back on a series of small squares whose walking surface follows the trend of the vaults of the underlying cave dwellings. A method that allowed the unusual urban development, characteristic of its Sassi districts.

In the Piazzetta Interna the social life of the inhabitants took place, here the children played, here in good weather women did the laundry in the common washrooms and hung clothes to dry using the rings fixed in the walls and removing the cloths from the walls with the aid of long wooden pitchforks. Here the women worked, sitting outdoors, in yarn and knitwear, chatting with each other and indirectly by exercising collective control over children’s games and caring for the elderly. In these neighborhoods there was always the cistern for collecting rainwater and the oven that served the entire district for cooking bread and focaccia. Chimneys with their characteristic cappelletti emerge from the line of houses.

Once, on the first of August, in the neighborhood, the feast of the ‘crapiata’ was held, which was born as a thanksgiving for the harvest: in the square, each family carried a handful of freshly threshed wheat and one of legumes that were cooked in a large pot and consumed in common, a tradition that strengthened, with music and dance, the life and unity of family groups.

The oven is recognizable for the size of the chimney that rises, with the high and massive construction, among the many specimens that dot the roofs of the houses that close the most neighborhoods. The wood oven was an indispensable structure for the life of the neighborhoods. Each family, weekly, kneaded their own bread which, before cooking, was marked with the stamp of recognition. A stamp in worked wood, heir to an ancient pastoral art, still alive in the span of time between the two world wars. Beautiful specimens of these stamps can be observed at the Domenico Ridola National Museum.

From the Malve, on the right, with its characteristic configuration, the large spur of Monterrone rock emerges from a tangle of ancient houses. From a series of steps you reach the high plateau which turns around 180 degrees around the top of the cliff and overlooked by the two cave churches of Madonna de Idris and San Giovanni in Monterrone.