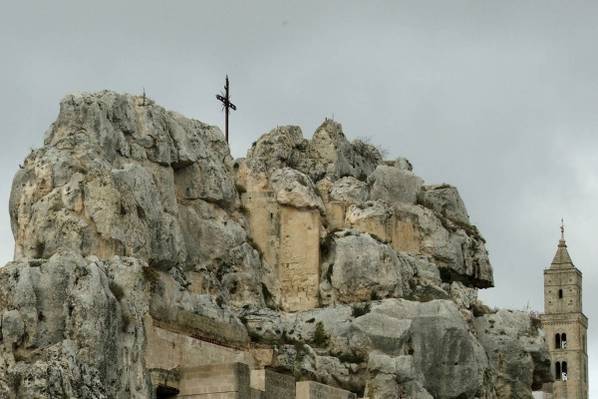 A dark tunnel, connects the church to the crypt of San Giovanni in Monterrone. The churches were not originally communicating but divided by a thin tuff partition. This narrow passage is enriched by valuable frescoes which, together with those present in the crypt, cover a time span from the XII to the XVIII century. On the left wall a Pantocrator Christ, that is Governor or Lord of the World, of the XII century, blessing the Latin and supporting an open Gospel in which a Greek text is inscribed. On the outer edge of the lunette the Latin inscription: Mundi Salvator Simil et Sum Lucis Amator.

A harmonious fusion of the Byzantine and Latin elements. Above, we find on a severed arch, a Saint Monk on whose identity there are perplexities among scholars. The fresco was dated 13th century.
Opposite St. Nicholas, bishop of Mira in Turkey, whose bones were stolen and brought to Bari, where they are kept in the cathedral, where the saint is the patron saint of the city and particularly revered. The fresco is dated to the 14th century.

Leaving the tunnel we find ourselves in the crypt of the church, used first as a baptistery and later as a burial place, full of very interesting frescoes: in the recess in front, on the left, a 13th century Annunciation, in front of it, inscribed in the typical frame arch, a San Giacomo minor, second half of the thirteenth century, apostle highly revered by Christian communities, also called ‘brother of the lord’ because, probably, cousin of Jesus. He had the privilege of a special apparition of the risen Christ having made a commitment with himself himself not to eat until the moment when he would see the resurrected Christ. He is considered the first bishop of Jerusalem and died a martyr by order of the High Priest of the Jewish temple of Jerusalem, Ananus II, and, alongside, a Saint Peter also datable around the mid-thirteenth century, both attributed to the master of Bruna.

There are still visible on the frescoes, on the bottom right, the star of David, and on the left a particular crucifix, graffiti symbols that left the pilgrims returning from the Holy Land, which seems to have made an obligatory stop here. On the right, turning the corner, Saints Gerolamo and Apollonia, followed by a schedule with the representation of the Madonna Odigitria (indicating the way, that is, the Child) according to some scholars and Saint Andrew for others. The palimpsests are quite widespread in the rock churches of the Matera area, these are the overlapping of frescoes made in different eras, most of the time determining the modernization and renovation of the churches. The older frescoes were hammered to make the new fresco adhere to it but in this case, probably due to an excess of devotion, this work was not carried out on the saint’s face and so at that point the new fresco did not adhere, falling, and shows the face of the unknown saint of the ancient fresco below.

On the opposite wall, the most recent fresco of the church depicts Christ and Saint Agnes, a Christian martyr, a Roman virgin, victim of the persecution of the emperor Decius. She suffered martyrdom at a very young age, at about 12 years old, and is remembered as an example of courage and purity. She is the protector of virgin maidens. For others, the latter depicts Saint John, with delicate features as he too was killed at a young age. A 16th century fresco followed by the Virgin with the name of the client.