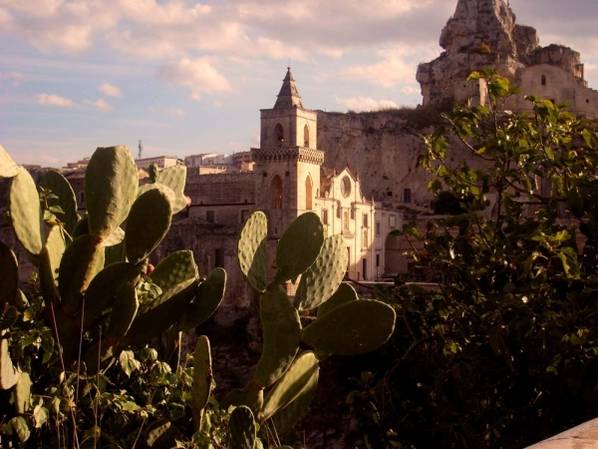 The current appearance of the CHURCH OF SS. PETER AND PAUL, popularly known as the church of San Pietro Caveoso and considered, in the old days, one of the major religious landmarks of Matera both for the size of the parish and for the wealth of its assets, dates back to the end of the thirteenth century early 14th century, while the initial construction dates back to 1218. The baroque facade is motivated by pilasters that frame the portals and end in acroteri, while the niches respectively contain the statues to the right of San Paolo, to the left of San Pietro and to the center of the Madonna della Misericordia, symbol of the universal Church, which welcomes those who invoke its protection under her cloak; to note on the left of the Virgin, the supplicants are shown wearing hoods on the head, according to what happened at the time of the construction of the Church, when religious confraternities were widespread, often requiring the anonymity of their members.

The cult building has undergone changes and renovations over the centuries with the loss of many of the original construction features. In the seventeenth century the church was completely renovated with the current facade and the construction of the bell tower, while the interior was enlarged, the side chapels were added and replaced once in tuff with the original wooden trussed ceiling.
In 1752 the church was reconsecrated by Archbishop Lanfranchi and was still modified: the cusp on the bell tower was added, the interior was covered with stucco and decorations and a wooden false ceiling was placed under the tuff roof.

ENTERING THE CHURCH one is struck by the silence and charm that emanates from the central nave with the original ceiling hidden in the eighteenth century, by the false ceiling of painted wooden planks representing “The Christ who entrusts the future of the Church to San Pietro”, ” Madonna del Confalone “and” Conversion of Saint Paul “. In the medallions: “San Giovanni da Matera”, “San Donato and the angels” and, at the main altar, “Coronation of the Virgin”.

Originally there were eight side chapels, four on the left and four on the right. Traces of the latter remain having been destroyed with the detachment of the church from the Monterrone cliff, implemented to make room for the construction of the oratory and an arch out of context that allows driveway access behind the Malve-Casalnuovo districts along the upper edge of the gravina. Inserted in niches, three statues: on the right towards the left: San Leonardo, the Madonna and Child, called “De Vexillo”, part of the destroyed chapel of the Confalone, brotherhood aggregated to the archconfraternity of Rome with which he participated in the graces and indulgences granted by the popes, dating back to the 16th century, and San Giovanni da Matera.

The central nave ends with an eighteenth-century altar dominated by a wooden polyptych dated around 1540, the work of an anonymous painter from Matera, depicting the Madonna and Child between Saints Peter and Paul; the Last Supper is shown in the predella; in the upper part the representation of the Eternal.

In the left nave there are four chapels: the first, dedicated to the Virgin of Sorrows with a cross vault, has very few traces of a presumably 15th century fresco and contains the seventeenth-century painting by Alessandro Fracanzano “Pietà”; in the second chapel, under the cover of eighteenth-century stuccos, two groups of seventeenth-century frescoes by Martino Deghello reappeared after the restoration, representing stories of the lives of the saints: in the first La Vergine, San Antonio Abate and San Lorenzo, in the other San Domenico, San Pietro and San Paolo, while in the apse, the remains of Pantocrator with Saints and a small offerer.

The next chapel is dedicated to Sant’Antonio: an altar decorated with six bas-relief tuff panels, painted with stories about the life of the Saint dated 1531 and probably executed by Altobello Persio. On the right and left two paintings depicting a Madonna and Child with Saint Anthony, dated 17th century.

In the last chapel, currently dedicated to the Sacred Heart of Jesus, we find the wonderful baptismal font of the thirteenth century which, freed from the layer of stucco added over the centuries, revealed splendid bas-reliefs including the Easter Lamb, the great ‘Mani di God is a telamon (support statue) with a strange imaginative animal and the symbols of the four evangelists. There are also seventeenth-century frescoes of saints, including San Francesco, San Domenico and a part of a probably sixteenth-century wooden bas-relief representing God the blessing Father.