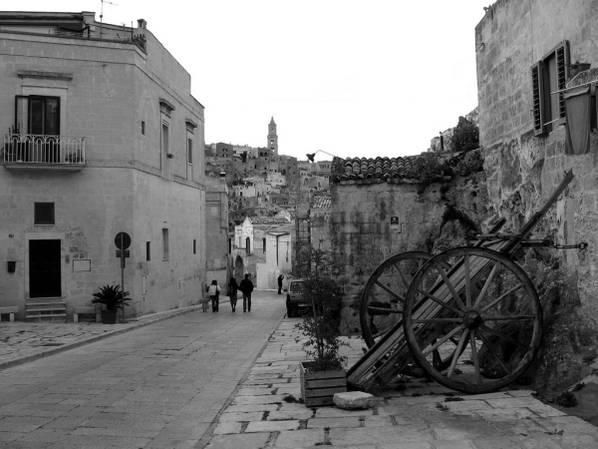 Via Bruno Buozzi is the road that allows you to get off in the Sasso Caveoso. A road artery dating back to 1934, obtained by covering a small ravine, the collector of rainwater from the hilly areas outside the city called “grabiglione”, a name clearly onomatopoeic that evokes precisely the tumultuous flow of the waters, a moat, once, bypassed by bridges able to connect the city district of Sasso Caveoso with the extreme periphery of the districts Malve and Casalnuovo. Today the road looks like a steep descent surrounded by buildings of the most varied architectural forms. Buildings that are sometimes strangely modeled according to the geological line of the rock and that offer a landscape variety with a precise period determination that extends from the 17th to the 19th century and determine a set of elements that offer a harmonious symbiosis between man and nature.

Steps to the right and left lead, stimulating curiosity, to make short detours to discover suggestive corners, such as the traditional ‘neighborhoods’, architectural and social nuclei of the ancient Sassi districts, and ancient primary elements of associative life. A sort of “horizontal” condominium consisting of a common outdoor courtyard where a dozen houses opened their entrance door and where the cistern for the collection of rainwater for collective use was located.

In this context, social relationships were established, sometimes close, through the traditional institute of confrontation (the godfather in the many religious sacraments: baptism, confirmation and marriage). In the past, in fact, since the state institutions were almost absent, the only form of social protection was the strong solidarity that developed between the families belonging precisely to the neighborhoods, which despite not having blood ties constituted in all respects a single large extended family .