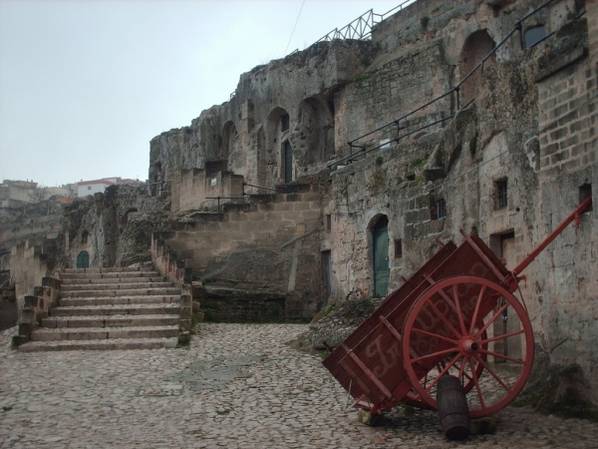 Vico Solitario part of the arch between Monterrone and the rectory of the church, that is, that part of the building used for offices and parish houses, of San Pietro Caveoso and, skirting the edge of the deep ravine, ends in front of a series of steps that lead to the plateau of Malve. The name Malve is determined by the presence of a homonymous plant whose leaves and flowers were used in medicine as emollients and which flourished, in abundance, among the rocks of the district. A short but suggestive road for the panorama it offers: on the right the high mass of Monterrone.

On the left the Murgia with primitive sheepfolds and the mule track, which climbs the steep wall from the bottom of the stream to the upper plateau with a zigzag pattern. An old route of the shepherds who lived in the two districts of the Malve and Casalnuovo facing the Murgia. Climbed the steps, the rocky block in whose bowels the ancient monastic complex of the Benedictine Order of Saint Lucia developed.