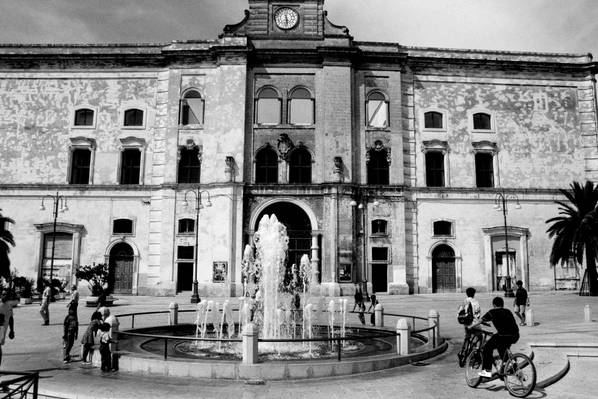 Piazza Vittorio Veneto, formerly called Piazza Del Plebiscito, was also known as “Piazza della Fontana” for the presence in the past of the large monumental “Ferdinandea Fountain”, built in 1832 to collect the water from the hill above the castle “De Montigny”, currently moved a few hundred meters further down the road, near the town hall.

The current appearance of the square is due to the restoration works of 1993, when the war memorial was moved (Benedetto d’Amore 1926) and the road that crossed the square was eliminated, to bring to light the “middle warehouse”, old plan of the city, partially open to visitors, which is lit by going down the iron staircase near the large fountain in light stone from which high jets of water gush out.

The underground rooms that compose it extend under the whole square for more than 5000 square meters until you get under the Convent of the Annunziata, which even has a tower in the foundations probably belonging to the defensive walls of the Tramontano Castle, and includes snow-tanks, cisterns, shops, warehouses and homes. In this ancient underground city there is a remarkable structure: The “palombaro”, a huge cistern more than 15 meters high and which could contain 5000 square meters of water, currently used occasionally as an exhibition space and for the moment not open to visitors, which provided for the needs of water supply of the part of the city developed on the “plan”; in fact, we remember that in Matera there is no spring water but every single drop of rain was collected and collected in the articulated system of cisterns and channels that perforate the Sassi. Of course, in this housing settlement there is also a church: the Church of the Holy Spirit, an ancient place of worship dating back to the 9th century, of which the remains can be visited: three naves with traces of very deteriorated frescoes which, however, retain their ancient elegance, evident in the delicate architectural friezes on the pillars that divide them. It also preserves frescoes unfortunately not readable due to the poor state of conservation, but which were probably of fine workmanship, as can be seen in the Hagia Sophia, on the right. At the entrance, on the right, it is possible to see traces of the oven and the flint obtained in a recess since this church, like many other Rock Churches, was used as a home during the overcrowding period of the ancient Sassi districts (until the 1950s ).
Crossing the underground church of the Santo Spirito it is possible to directly access the Sasso Barisano using the narrow stairway that leads to via Fiorentini.

Above the underground rooms during the works of 1993 a gap was opened in the curtain of eighteenth-century buildings that “hid” the Sassi from view, as they were considered an shame for the city in the past, creating a wonderful panoramic point perfectly placed in line with the facade of the Cathedral, which shows us the Sasso Barisano which winds below us with its maze of neighborhoods, stairways and alleys.
Via Fiorentini lies at our feet, reachable through the passage through the underground church of the Holy Spirit.