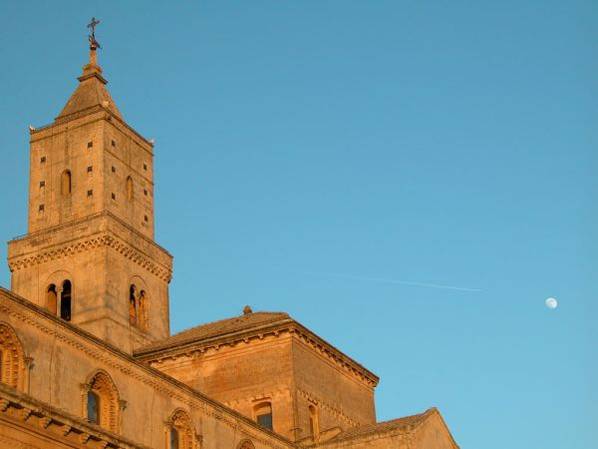 The Cathedral of Matera was completed in 1270, and built in the Civita, the highest and most visible point of the city where the first inhabited center of the Sassi rose, on the area of a Benedictine monastery dedicated to S. Eustachio consecrated in 1082, and, as it was discovered in the early 1900s during the construction works for the foundations of the adjacent palace of the Archdiocesan Seminary, it was built on an artificial embankment to further raise its position (it remains visible from all points of the ancient city and from the surrounding countryside).

During the aforementioned works, deep trenches were dug which revealed in 12 meters, as it went deeper, all the ancient housing layers of the city: medieval houses, an early Christian church and houses of the same period, Byzantine finds such as coins and architectural remains , another floor of Roman houses, Greek sepulchres with important vases that are part of the typical funerary equipment and finally remains of ingested ceramic characteristic of the early Iron Age.

In short, an “X-ray” of the ancient life of Matera. The building is in Apulian Romanesque style and has an exterior rich in highly symbolic elements that recall the spiritual life of the time. The main facade faces the Sasso Barisano valley and presents, on the main door surrounded by delicate floral decorations, the statue of the Madonna della Bruna, patron saint of the city, while in the niches on the sides of the door, we see on the right SPietro, while left S.Paolo. In the external lateral niches we see on the right S. Eustachio, and on the left S. Teopista minor patrons of Matera. The statues are attributable to Persio, a Matera family very artistically active in the mid-16th century.

The central rose window, on the other hand, is made up of columns and small arches and recalls a very popular theme at the time: the wheel of fortune, the game of fate. It is dominated by the Archangel Michael who crushes the dragon and surrounded by figures of people who seem to represent the emerging social classes of the time from the shape of their clothes: a rich man on the right, a craftsman on the left, a nobleman below. The four columns and the twelve semi-columns on the top are probably a reference to the four evangelists and the twelve apostles, while the various figures that appear to adorn the architectural details (such as the shelves of the two side windows) are nothing more than an “instructive” representation of the possible moral dangers that could threaten the life of a good Christian, for example the siren (left window) symbolizes the pitfall of mortal desires and passions that could deviate from the right path, or the eagle (top shelf) which devouring animals symbolizes the possibility of being devoured by sin.

The side facade of the church has two monumental doors: the first is the “Porta di piazza” and has very interesting decorative elements: on the top a small panel, represents in bas-relief the prophet Abraham, chosen by God to carry on the faith, and father of the three monotheistic religions Christianity, Islam and Judaism, and suggests an idea of brotherhood between them, a message probably addressed to the communities belonging to the three religions present in the city between the thirteenth and fourteenth centuries; on both sides we see two Benedictine monks one in prayer, the other intent on reading a book, a clear reference to the Benedictine rule of “Ora et labora”. There are also intricate plant motifs to decorate the customary door in the Apulian Romanesque style.

The next door is the “Lion gate” clearly so named for the two statues that adorn it, just two lions crouching symbolically to guard the faith. At the top the door is decorated with protruding pine cones, floral motifs and heads of angels or maidens, to symbolize the purity of the Church and according to some historians with an “apotropaic” function, that is, to chase away bad luck. Between the two doors, a finely decorated small window recalls the decorative motifs of this latter door: it is an ancient sepulcher of a Saracen judge, as stated in the Latin inscription below. The bell tower is 52 m high with a quadrangular shape and is divided into 2 trunks by a terrace: in the lower part it consists of three floors each adorned with mullioned windows, in the upper part it thins and ends in a cusp surmounted by a sphere with a cross above.
In the bell tower there are seven bells tuned in E flat which during the celebrations ring throughout the ancient city.

Entering the Cathedral of Matera, the contrast with the external style is evident. Nothing has remained in its original state, except for a few important frescoes and the beautiful figured medieval capitals of the 10 columns, very worked and one different from the other; the rest has been completely altered over the centuries.

The plan of the church, with a Latin cross and three naves, measures 54 m. in length, 23 in height and 18 in width, and has been altered over time, as it has been lengthened by breaking through the apse and changing its shape. In the seventeenth century stuccoes and decorations were added everywhere that in the 18th century. they were further covered with a golden patina The original ceiling was also covered in 1719 with a wooden false ceiling and in the XIX three paintings painted by Battista Santoro were inserted with themes dear to the culture of Matera: S. Giovanni da Matera and S. Eustachio in the medallions side and “the Visitation of the Virgin” in the center. In the panels on the walls just below the ceiling “Stories of the Virgin”, frescoes by Anselmo Palmieri.

To the right of the main entrance is the famous fresco of “The Last Judgment”, the only surviving example of the original medieval pictorial decoration of the Cathedral, made by Rinaldo da Taranto, a fresco master active in the late thirteenth century, discovered by chance during the work of restoration of the seventeenth-century paintings placed there. In the lower part of the fresco, the Archangel Michael pierces sinners in hell, which we see in a group attacked by snakes. There are also people in the group whom we can identify as a king, a pope, Benedictine religious etc. precisely to indicate the equality of souls after death.

In Purgatory (upper part) we see a more static scene: purification tanks with the disturbing image of limbs and heads that emerge from the mouth of large fish: it is nothing but the symbolic rebirth of purified souls. In the lower order of the fresco, the theory of Saints 400esque: St. Peter martyr, St. Julian, Madonna and Child with St. Luke. In the right nave, respectively, on the first entrance door (Porta di Piazza), Madonna delle Grazie between Ss. Ilario and Giovanni da Matera by Domizio Persio (1592), while on the second door, (dei Leoni) there is a beautiful canvas by Carlo Rosa (1652) representing S. Gaetano. On the last altar of the right nave Polyptych by Vito Antonio Conversi.

The main altar, coming from the Abbey of Montescaglioso, is made of fine white marble and is dominated by the “Cona Grande” purchased in Naples in 1580, made by Fabrizio Santafede. In the central part it represents the Virgin surrounded by Saints John the Baptist, John the Evangelist, Biagio, Donato, Peter and Paul, and in the upper oval, the Holy Trinity. Below, in the boxes, scenes from the Gospel. Behind the high altar is the wooden choir, meticulously carved in 1453 by Giovanni Tantino from Ariano Irpino, which consists of 50 stalls and is covered with a dense network of plant motifs, fantastic animals and sacred subjects carved in wood containing strong references Franco-Flemish culture, Islamic decorative repertoire and Benedictine illuminated texts.

Coming out of the choir, immediately to the right, the small entrance door to the bell tower shows us in a couplet placed on the architrave, the completion date of the church, 1270. A little further on, at the end of the left transept, the altarpiece of San Michele, sculpted by Altobello Persio in 1539, shows us the saint in the central part and in the niches the Madonna and four Saints, while in the predella, in bas-relief, the last supper, among delicate Renaissance friezes.

Continuing on the left, you can see the crib placed in the chapel called “of San Nicola al cimitero”, sculpted in 1534 by Altobello Persio and Sannazzaro by Alessano in painted limestone, a work very dear to mothers for the contained elements of the city: the castle on the top reminds us of the Tramontano castle; while the shepherds with the animals made in a perfectly realistic way (sheep, goats and guard dogs) take us back to the strong agro-pastoral vocation of the city in the 1500s. Starting from 700 many of the side chapels were removed, (they were even 33 in the middle 500), but we are left with a splendid example of what they might have looked like at the time: the “chapel of the Annunciation”.

It is the last chapel in the left nave, probably built in the mid-500s by Altobello Persio and consists of a coffered vault and niche walls, while the statue on the altar represents the Virgin and Angel. In the upper lunette there is a Pietà and on the sides the statues of Ss. Rocco and Caterina d’Alessandria. The third altar, on the other hand, is dedicated to Saint Anna, who appears together with the Virgin in the central canvas painted by Francesco da Martina in 1632.

The first altar in the nave deserves a separate mention: used as a high altar until 1776, it houses the fresco of the “Madonna della Bruna” (1270), protector of the city. The name “Bruna” according to some is a reference to the dark complexion of the face of the Madonna, but more probably derives from the Lombard early medieval word “brunja” that is “armor” “defense”, clearly referring to the protection exercised by the Patroness over the city. He is particularly revered by the Materani, who on 2 July celebrate their patron saint with a special and spectacular festival: the feast of the brunette.